For isotropic materials such as steel, there are 3 elastic properties that must be known:

For isotropic materials, these three properties are related to each other by the following equation:

So it is only necessary to know two of the values, as the other property can be determined by this relationship. Appropriate values for these properties are listed in the ASME Piping Codes such as B31.1 “Power Piping” and B31.3 “Process Piping”.

For orthotropic materials like FRP, there are 5 elastic properties that must be determined:

The axial and hoop modulus values and the Poisson ratios are related by:

So only 4 of the 5 properties must be known, as the fifth can be determined by this relationship.

For 55 deg. filament wound pipe, typical values of these properties would be:

As you can see, the modulus values are significantly less than those for steel. In particular, the axial modulus of elasticity is less than 1/20th that of steel, which means FRP pipe is significantly more flexible than steel pipe. That fact can be quite helpful in that it makes offset legs in piping systems very effective at absorbing thermal expansion of the piping. But we also have to be careful to limit support spans to more modest values than for steel pipe to ensure the deflection between supports is not excessive.

The elastic properties can vary widely depending on the construction of the FRP laminate. The format of the reinforcement and the orientation of the fibers in particular can have a huge effect on these properties. The properties can be determined by testing samples of the material, and this is often done for “standard” laminates. That is, for pipe products that are manufactured using a specific and fixed construction (resin system, glass type, fiber format, fiber orientation, and laminate sequence), determination of these properties by testing is a practical approach. 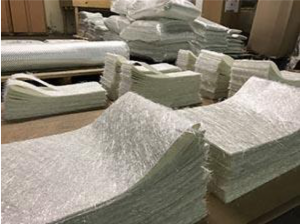 However, one of the distinct advantages of using a composite material like FRP, is the ability to custom-design a laminate to suit the specific application. This could mean anything from selecting a different resin, to changing the corrosion barrier construction, to adding directional reinforcements, to changing the entire laminate sequence. It would be impractical and cost-prohibitive to conduct testing on all such potential solutions to a given problem. Fortunately, there are mathematical procedures available that allow us to calculate the elastic properties of these various constructions. These procedures are addressed by the field of Mechanics of Composites.

The mathematics associated with Mechanics of Composites can appear a bit daunting to those not familiar with it, e.g.

But many manufacturers and designers of FRP equipment use these principles on a daily basis and are well qualified to take full advantage of them.

Mechanics of Composites includes two subjects of direct relevance to our current discussion, i.e. Micromechanics and Lamination Theory. Micromechanics provides a method of determining the properties of individual layers (or “lamina”) from the properties of the constituent materials (resin and glass) and from the configuration of the layer, i.e. thickness, glass content, fiber format, and fiber orientation. The field of micromechanics is largely empirical, and there have been several micromechanics theories developed over the years to attempt to accurately predict lamina elastic properties. One of the most widely accepted theories is that presented in Military Handbook 17, and it is this theory that has been adopted in ASME NM.21, ASME RTP-12, and ASME Section X3.

In our next article, we will continue our discussion on mechanical properties required for a pipe stress analysis by looking at the allowable stresses.

Next article in the series: Strength Properties